Four days into the conference, the Philippines continued to keep its visual, aural, culinary and weaving skills, fashion designs, and organized knowledge sustained, as the delegation’s presence continued to envelope the participants and audience of the Budayaw II Festival of Cultures. During the colloquium, four Filipino presenters contributed to the BIMP-EAGA’s body of knowledge. Like their counterparts, the Filipinos delivered crisp and substantive presentations on topics that evolve around the rich culture and heritage of the Philippines.

Speaking among five resource persons on the first day (20 November 2020), Dr. Mario Aguja discussed the legislative and policy frameworks and programs in the country that provide an environment to develop, preserve, and conserve Philippine culture. In his talk, Dr. Aguja explained Philippine policies on cultural preservation as well as the proposed BIMP-EAGA coordination on culture.

Aguja’s inputs on Philippine policy and legislative environment blended well with what was discussed by a film maker from Brunei who described his film making as “making the unfamiliar familiar.”

The second speaker, a European who married into a Sarawak native, talked about the need to “certify the use of natural materials on Sarawak crafts” in order to put integrity into all these artistic pieces that has generated commercial gains for the community due to tourists’ spending.

The third speaker from the northern part of Sarawak discussed the burden her family had to go through after his father left his indigenous community in favor of getting a good education, a good job, and comfortable life. She summarized her feeling by saying, “leaving your community is leaving a part of you behind.” However, this was not the end as her father returned and established a foundation that would eventually develop cultural products from the community, uplifting his constituent’s economic condition.

Another speaker, from the Indonesia’s Ministry of Education and Culture discussed the promotion of cultural diversity in Indonesia based on the five principles of “Bhinneka Tunggal Ika,” the national motto of the said country which translates to “Unity in Diversity.” Indonesia has about 300 indigenous people groups. The speaker shared the international programs of Indonesia in this regard, including the yearly fora and conferences on culture and arts.

On the second day of the three-day sub-event, the promotion of culture and the arts was tackled by six speakers including Fredo Pandian Basino. Basino talked about his narratives on the struggle on self-determination of the indigenous peoples (IPs) of the Philippines. He discussed how these IPs fought for the effective implementation of the Indigenous People’s Rights Act of 1997 commonly known as the IPRA Law. Basino also talked about what his people did to achieve the first Comprehensive Indigenous People’s Code of Sarangani Province in southern Philippines.

Aside from Basino, a speaker from the central part of Sarawak talked about her foundation’s optimization of the Malaysian government’s Market Development Grant (MDG). She discussed how her foundation was able to penetrate the global market despite stiff competition on native products such as natural crafts, the product that she is promoting and advocating. She also gave the colloquium participants a glimpse into the Malaysian government’s direct support to small and medium enterprises through the said grant as well as the establishment of a Ministry particularly dedicated to supporting medium, small, and micro enterprises (MSMEs).

Meanwhile, a speaker from Brunei discussed the use of electronic, interactive media in promoting arts and crafts as business enterprises. He also discussed the five point strategies of BIMP-EAGA sub-region.

The third speaker, Janet Rata Noel, discussed the role of an interactive museum in promoting tourism. And just like the School of Living Traditions in the Philippines where the young can learn from the cultural masters, Noel’s presentation on her area showed great promise for mutual understanding and benefit of the BIMP-EAGA member countries.

The Director of the Department of Tourism, Culture and Arts of Labuan, Malaysia, on the other hand discussed the Borneo Arts Festival – a competitive annual celebration that rewards winners with close to 700,000 in Philippine peso.

The last speaker of the day was the youngest of them all. A visual artist, he discussed the social power of culture and highlighted the success of South Korea due to a government policy and a well-tested technique in information-communications technology. He also discussed South Korea’s budget allocation on digital marketing which is targeting the youth. 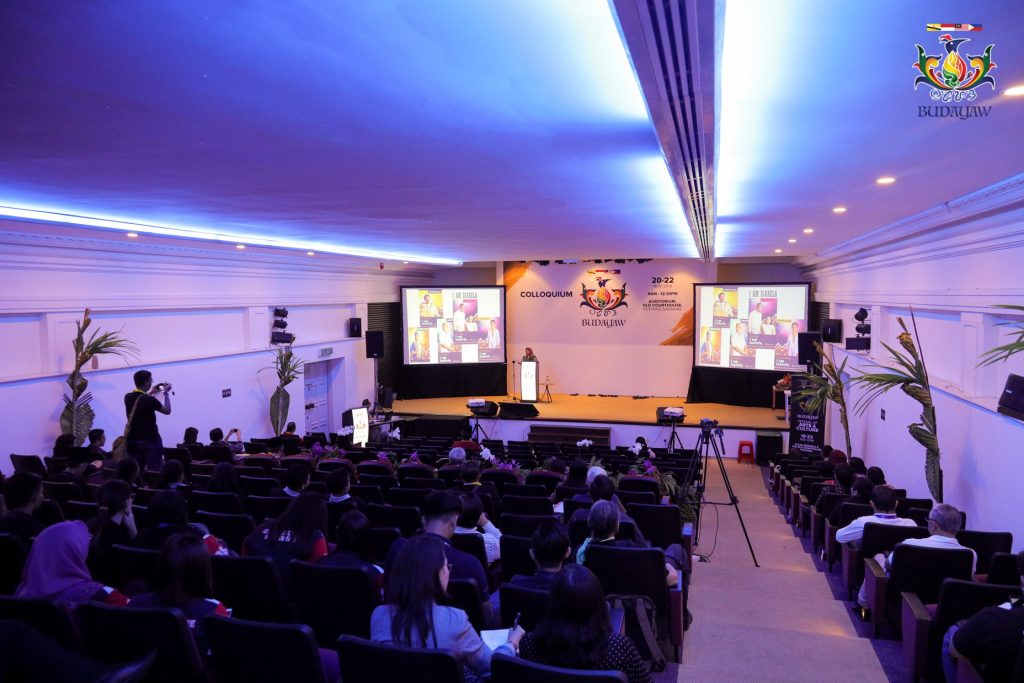 United under the day’s theme which is development, Remotigue presented the timeline of Philippine history and the evolution of the sector of cultural work. She discussed the setting up of the Philippine National Commission for Culture and the Arts, established in 1987 as the Presidential Commission on Culture and the Arts. She said, it was the government’s way of bringing forth the cause of promoting, and helping the culture and arts sector. She further went on to emphasize that the NCCA is a platform where practitioners from the private sector sit as members of the Board of Commissioners, bringing with them their expertise and experiences from the field.

Mayor Turabin-Hataman’s presentation was perhaps the most appropriate finale to the Philippine presentations as it echoes the conditions of her region. Her words were teemed with poetries and music. She opened by saying. “I find my interest in culture while I was working for peace” and shared a quote from her 13-year old son who said, “I don’t think the non-Muslim Filipinos don’t like us, I believe they just don’t know us.”

It is a voice of wisdom from a young boy bringing hope for the new, unified generation. Mayor Turabin-Hataman was also very emphatic in saying, “we campaign against foreign ideologies that instill violence and war,” knowing the fact that extremists exist in some parts of southern Philippines.

The rest of the speakers discussed specific experiences in their respective communities, giving the audience a periscopic view of their individual development programs and projects.

A professor from Brunei for example, shared about Rumah Pusaka or heritage houses used as mobile black box theatre, reminiscent of the mobile theatres in Mindanao during the 1970s and 1980s.

Another professor from Malaysia tackled the benefits of creative tourism. The said speaker said that when tourists have the opportunity to do beadwork or textile weaving in a place they are visiting, they will appreciate more the culture of their hosts.

A dancer-turned chief executive officer of the Arts Council of Sarawak discussed in detail the functions, types, and the purposes of dances. It is his belief that one must distinguish what are inherited vis-a-vis what are imitated.

The last speaker from Indonesia presented a paper on “Creating with the Community.” He talked about the different issues and opportunities in engaging the community in the creative process. 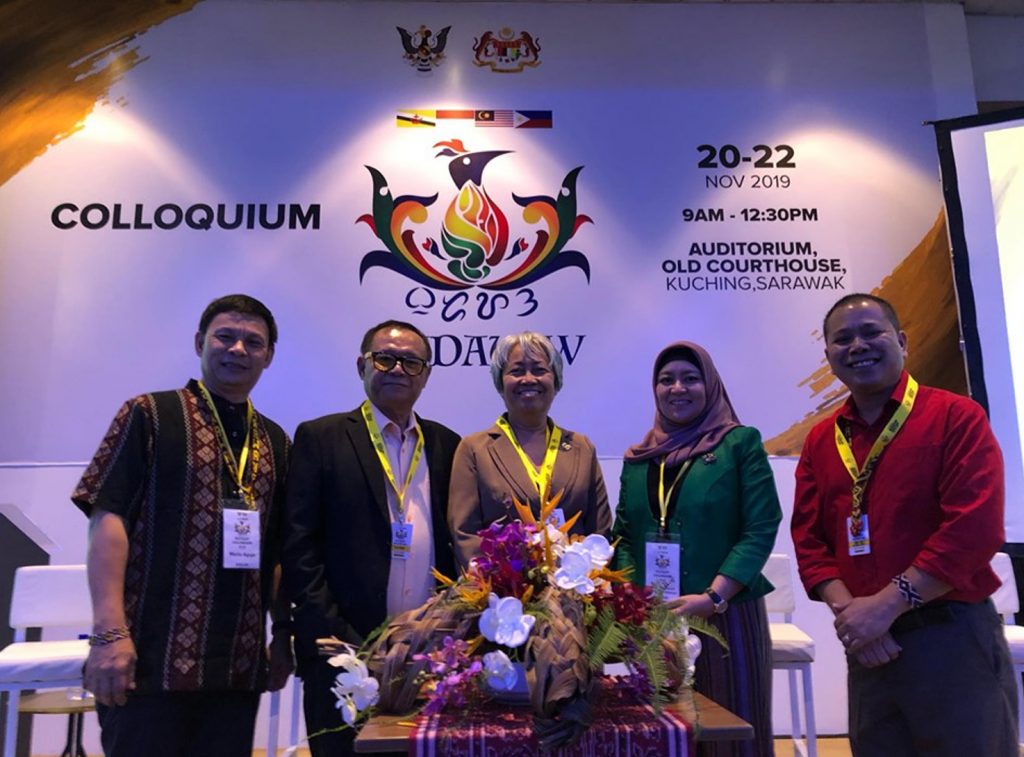 As Budayaw III in Brunei is being looked forward to, Villano will keep the coordination going with BIMP-EAGA countries in order to continue gathering resource persons and putting form and substance in papers shared in the colloquium.

A future project being considered is to encourage students in the Mindanao-Palawan area in presenting papers in the succeeding colloquia. A traveling lecture of the recorded presentations of Filipino speakers is also in the pipeline which will be brought to students in Palawan and Mindanao, the identified growth areas in the country.