Jewels of the EAGA: Bringing Traditional Dances to a Contemporary Space

The variety of colors of the costumes vivified under the sunshine, filtering through the skylight in an area already suffused with artificial lighting. The audience sat in an air-conditioned comfort, surrounded by glass-fronted storefronts that beckoned with the latest fashion, gadgets, toys, and trinkets that were perfectly manufactured, and watched the young dancers brought to life age-old movements and expressions, enhanced and added with flourishes to sustain attention or to elicit emotions.

As with the first staging in the Philippines in 2017, the “Jewels of the EAGA” remained to be one of the most popular features of the second Budayaw: BIMP-EAGA Festival of Arts and Culture due to the fact that dance is highly entertaining, can incorporate spectacle, and is a language understood by all. Thus, it is one component where the commonality and shared cultural heritage among the EAGA countries can be readily observed and even enjoyed.

“Jewels of the EAGA” aims to showcase traditional dances of Brunei Darussalam, Indonesia, Malaysia, and the Philippines and also welcomes more contemporary versions and even fusions, recognizing that the art form constantly evolves but still has the ability to maintain many aspects of their traditions and roots.

Like many of the Budayaw Festival events, the dances were performed, on November 20, 2019, inside the Plaza Merdeka, one of the biggest and newest malls in Kuching, Sarawak, Malaysia. It may seem like a clashing, incongruent or contradictory scene—traditional or tradition-laden motions and cultural affair against a commercialized and globalized space. But it was at same time seemed right as it was an effective way of engaging as much people as possible which is one of the aims of the biennial festival.

The mall is, after all, essentially a marketplace, which has become a juncture of sorts for people, facilitating meetings and gatherings. Like any market, old and new, it eventually becomes multi-functional, prone to reinvention according to the purposes of people and commerce, and thus it itself is a product of tradition. Aside from its modern trappings, the mall can serve as a blank space where creativity and even traditions can thrive, tools for their presentations and even continuance and evolution. The space is changed as much as the bringing of the traditional dances to these spaces has changed them, as they adapt to the spaces’ constraints and are freed from perceived constraints of traditional spaces from where they were birthed and nurtured. “Merdeka,” the mall’s name, coincidentally means “freedom.”

A cultural event in the mall had become more attuned to the host city itself, Kuching, which charms with its harmonious blend of old heritage structures and modern buildings, as well as the urban landscape and the natural environment, punctuated by a river that languidly flows across the city center and the lush forests sweeping the fringes.

The “Jewels of the EAGA” 2019 performances evoked the repertoire of the inaugural festival in 2017, with some additions. Senandung Budaya of Brunei Darussalam’s Ministry of Culture, Youth and Sports offered more Brunei Malay dances (though other ethnic groups such as Belait, Brunei Bisaya, Dusun, Kedayan, Lun Bawang, Murut, and Tutong also live in the small state) including the zapin or jipin laila sembah, joget, dundang-dundan, and kayum oh ya kayum. They had the least number of delegations among the participating contingents, and the performances were not dependent on spectacle, allowing for focused attention to the dancers’ grace, refinement, simplicity of movements, and elegance in costumes.

The jipin tar and joget are most known of Bruneian folk dances, performed as welcoming gestures as well as to express joy, and are usually seen at wedding ceremonies and festivals. They are usually performed in groups, thus choreography plays a vital role.

Indonesia was represented by the group Sanggar Bougenville from Pontianak, the capital of West Kalimantan, an adjacent province just south of Sarawak. Pontianak is distinguished by having the largest population of Chinese-Indonesian in the country, living together with another dominant group, the Malay. It is also home to other ethnic groups—Dayak, Javanese, Bugis, Madurese, Sundanese, Banjar, Batak, and Minangkabau—becoming a melting pot.

This merging of cultures could be seen in their presentation, the modern adaptations and recent innovations more evident. Accompanied by live music from traditional instruments such as drums and a set of gongs as well as modern and adopted ones such as the accordion, violin and guitar, and singing, the dances of the all-women group delivered livelier choreography in costumes incorporating more colors and modern cuts.

Malaysia offered dances from Sarawak, Sabah, and Labuan, states that are part of BIMP-EAGA. Aside from the dominant Malay, these areas are home to a number of ethnic groups, which are also present in Indonesia and Brunei Darussalam. Performances were more defined according to ethnicities and attempted to be as close to the traditional as possible—the Malay bermukun or bergendang, which usually performed during wedding ceremonies; the rajang be’uh or eagle dance of the Bidayu, which is inspired by the flight of eagles and is usually performed after the harvest season to entertain guests; the Iban’s ngajat nyambut tuai kayau or dance to welcome a warrior, performed during celebrations and to welcome important guests; the graceful datun julud or hornbill dance of the Kenyah people from Kabupaten, Balungan, Kutai Berau, and Pasir, performed to greet returning warriors, as well as to mark the end of the rice harvest season, and notable for the women dancers’ fingers extending and blossoming into large flowers of feathers; and a curious local version of the British folk square dance, which tells about Malaysia’s colonial history.

The Philippine delegation almost missed performing at the “Jewels of EAGA” event because of delayed flight coming from Kuala Lumpur, but they arrived straight from the airport in the nick of time to awe audience with performances that were closest to spectacle among the numbers. The performers, mostly young students, were from the Madayaw Cultural Ensemble, which is based in the barangay of Buhangin in Davao City, and was formed informally in December 1998 to carry out a performance during the feast day of the Immaculate Conception, but later on formalized as a group and invited to perform in different events.

Their repertoire consisted of the selected traditional dances from some of the ethnic groups of Mindanao including a couple of dances from the T’boli. They also performed the pangalay, and its variations, the pangalay agung and pangalay pattong, of the Tausug people of the Sulu Archipelago. Similar dance is performed by the Yakan people called pamansak and Sama people called igal. All names are general terms for “dance” in their respective languages. The pangalay/pamansak/igal is noted for its graceful movements, mimicking motions of their surroundings, and the use of finger extensions, called janggay in Sama.

Several dances of the Meranaw people, who live around Lake Lanao, were presented—kappa malong, showing the different ways of folding and wearing the tubular skirt malong and the distinctive Meranaw kind, the malong landap; the kapag-apir, which employs embellished fans and shows how the onor partly conceal her face with a fan as not to be too exposed in public; and the iconic and popular singkil, inspired by the Darangen story of Princess Lawanen and Prince Bantugen. With the use of bamboo poles and showcasing the skill of balancing on the poles, singkil is always anticipated.
The Madayaw Cultural Ensemble also picked to perform Jota Manileña to represent the capital city. 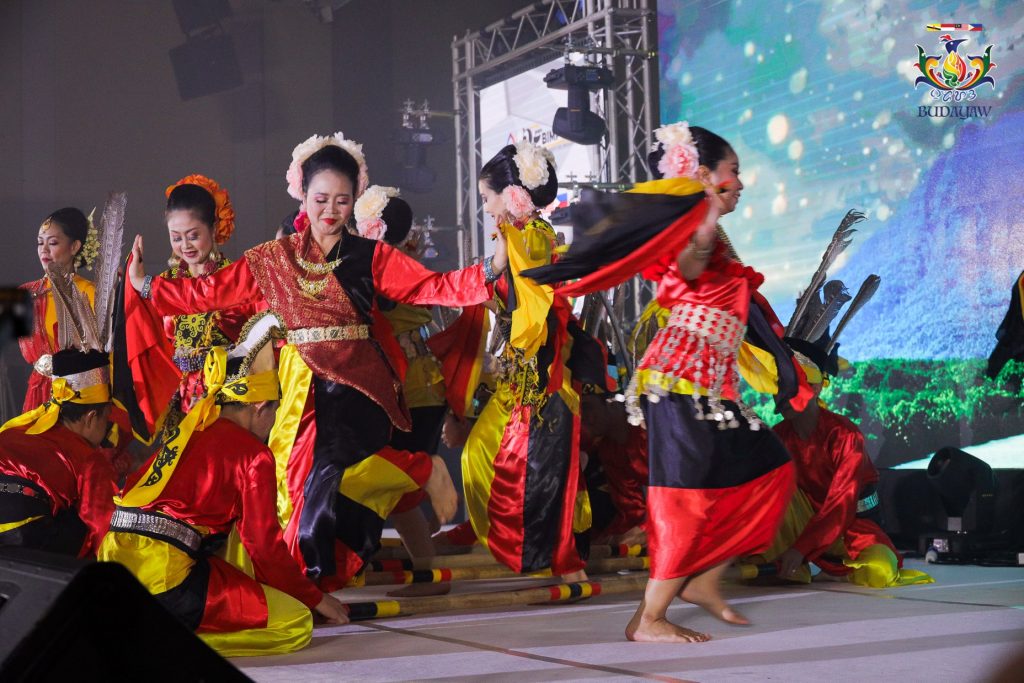 “We chose these dances to represent the cultures of the people in Mindanao and the Bangsa Moro and also a folk dance to showcase the Spanish influence in our country,” Ellorimo commented.

He observed that the dances in Brunei, Malaysia, and Indonesia bear many resemblances to the dances and movements in Philippine dances, especially those of the Moro peoples.

The steps of traditional dances are commonly mimetic movements, inspired by their surroundings. With strong similarity in environments, the emergence of commonality among the dance movements in the region is highly possible, aside from the sharing that may have occurred because of proximity.

Mimetic dances may have been attempts to follow as closely as possible to the subject of mimicking but these attempts had been limited by the human body itself. The recognition of this limitation gave rise to the stylization of mimicry, capturing more the essence and the grace, as well as the meanings to the communities. The mimicking constitutes a skill but the stylization is the start of artistry, making more pleasing, more entertaining, and even more meaningful the movements found in nature.

As these dances are carried on to the present times, evolutions have also occurred, taking on other meanings and functions, going from ritualistic to non-ritualistic, for example, as well as being “adjusted” to situations such as from a small community to the big stage.

In the case of the pangalay, the dance is largely instinctive without any choreography except from steps that are passed on, and is traditionally performed in small venues in a community. The pangalay in Budayaw was performed by a group, necessitating choreography to be more pleasing, more “acceptable” by the audience. The common traditional movements, however, were evident. Pangalay may be used in rituals but it is commonly performed for entertainment and is an important aspect in social gatherings.

Other dances were performed with more drama, bigger movements, and refined or altered stylizations suited for showcase. The spontaneity that characterizes some of the dances had been minimized.

These “adjustments” lead to the question of its “authenticity,” starting with the fact that the dances were taken out of their traditional performance venues, such as the communities, and were put on stage. But “authenticity” is a contentious subject and is difficult to define, and the festival made no pretense to “authenticity” but instead focused on rootedness and heritage, a more fruitful and attainable endeavour.

Another interference or intervention that influenced the dances, aside from bringing them to another setting, to another place, is the economic constraints of bringing a group. Thus, one group was made to present and represent a number of ethnic groups, and there are social implications of doing so such as “cultural appropriation.” This case could be seen in the Philippine group, which is composed mostly of generations after the recent, Christian Visayan-speaking “settlers,” who was given the privilege to represent the country but performing the cultures of other ethnic groups, likely of those marginalized. This particular question can be addressed in future staging of Budayaw, but it was the best that can done given the situation and besides, there was a successful outcome.

The dances performed at Budayaw have remained true to its purpose. From the start, dances were created for an audience or community to be seen and enjoyed and in that sense, one function remained intact—the inspiring of connectedness among viewers and performers, which in effect, created community and the fomenting of emotions. The focus on the entertainment aspect is also an important one, an immediate and apparent purpose that is inextricable, as it fosters communal enjoyment. After all, at its very heart, dance is primarily an expression of joy and a form of sharing and community.

Even as they tended more to the entertainment aspect, these dances are still essentially a ritualized form of everyday life, and carry with them stories, meanings, and ways of living stylized. And as stories are meant to be retold, engendering variations and refinement along the way, in each retelling, so are dances, carrying the layers of meanings, purposes in every performances over time. At the Budayaw Festival, these dances took on bigger purposes and meanings, helping create bigger community, forge understanding among different peoples, and make the audience realize the commonalities, which are evidences of the dances’ rootedness. As it reorients audiences to their roots, dance has always been one of those elements that are communal, shared and passed on, which could be vividly perceived at the Budayaw Festival.